Thank you , to all the well wishers, alhamdulillah to god and bugger me, now i am damn stressed man

I suddenly feel the obligation on my person to keep coming up with good movies because of all the accolades. What i do not want is for people to expect me to come up with the same kind of thing over and over. I am a person who gets bored very easily when i feel i am doing something which is not challenging or something which i feel i have done before. So that is why i am constantly trying to do new stuff. My predicament, i feel is, I wanna do some serious stuff this year, besides the comedy stuff which people have always known me for, but i know most people will still expect it to be a comedy. I think these people will be somewhat shocked, but i am adamant to succeed! and i am certain people will enjoy the new experience.. Hey P.Ramlee did both serious and funny movies extremely well, so it CAN be done. It's not anything new.

Alhamdulillah for my three awards at the Anugerah Skrin, i feel really gratified that the jury GOT THE MOVIE and what it was trying to say. It was never just a comedy and i am so happy that at last our efforts were recognised, having said that, just imagine that BULI BALIK never got the nod to go to the ASIA PACIFIC FILM festival because they feel a pontianak reflected us more as Malaysians . All i can say is...The selectors can imperiously kiss my brown buttocks for all i care.

Interesting story i heard recently about ANG LEE who was in this country to shoot parts of his new spy thriller 'LUST' with Tony Leung. Apparently, after shooting concluded here, ANG LEE has vowed never to return here ever again!! so saaad.
The reason (i asked in wonderment) i have been told is that the ministry of home affairs demanded to view all of his rushes! (film negatives to all those non film people out there). I guess because they want to check if ANG LEE had shot anything offensive about Malaysia, like putting the twin towers near a river in Melaka. SO i guess let's all just forget about any more hollywood money or technology transfer coming into this country ever again, for now. With all our red tape, Malaysia will never be an attractive venue for international film companies to shoot their productions here, eventhough we have some of the best crew and facilities in the region. Not to mention some awesome locations.

Just got back from Jakarta for the Malaysian Film Festival there, and let me say, it almost was the biggest waste of time for our movie industry professionals to go there, because when Kekwa decided to take over the event, it became a textile (batik and songket) and malaysian fashion festival.

I guess not enough foresight caused for the powers that be to schedule our little Malaysian festival at the same time as the Jakata International Film Festival. So, next to no one turned up to most of our screenings. The screening for BULI was done on a monday morning during working hours and we had 5 people watching it. Looking back, i wasn't even sure wether they were Indonesian or were just the FINAS workers who were taking care of the film's projection. We were lucky however that we had some friends in the indonesian film industry who got some local film students to attend for us. In one incident however, the film students from the jakarta's film academy who attended the festival were basically forced to come out of the screening hall of Pontianak Harum Sundal Malam 2 to go and watch a fashion show next door because there was nobody there and some Kekwa people were unhappy. The screening of the film was delayed by three hours. Oh did i mention that they made Pak Selamad Rahardjo (One of Indonesia's premiere film icons), who was there for a dialogue session post movie screening, was forced to watch the fashion show as well. A gentleman and a very sharp man, pak selamad i saw was quite visibly upset as his intention to be there at the jakarta international convention centre that day was purely for the film festival. To not make us feel left out, other malaysian artistes were also treated really poorly to the point that we felt like we were there as decorative figures to make some people look good. People who didn't even care about what is currently happening in the malaysian film industry. Some of the KEKWA people we met didn't even care to say hello to us there, I guess that would have taken up too much off their shopping time.

Me and Hans went to a night screening of BULI at Planet Hollywood KC21 Jakarta and managed to meet up with a few MEDIC students there who told us that they found out about the event by chance. They came in 1 hour late because they had just found out from an embassy guy who they had just bumped into.

I really feel that there were some people on such a power trip at that event in Jakarta, and they used the celebrities and film workers to make them look good, but have no respect for or care for what we do.

I guess I don't even have to mention that no thought or proper planning was put into the whole fiasco in jakarta, for example the door gift for unsuspecting atendees of the festival was a pewter bottle opener with the KLCC on it. Most softdrinks have screwtops on now. the only drinks which would really need bottle openers would be beer and soy sauce (KICAP TAMIN) bottles. Isn't that an odd gift coming from a muslim country. Now they are already talking about doing a Malaysian Film Festival in London, i think the malaysian students' association there could organise the event better than the ministry people here. We need people with passion to work on something like this.

In closing, the Aungerahs were great, but i felt what really made the night for me was the opportunity to sing with my old pal Zainal Abidin, it really brought me a lot of joy and took me back to a place where malaysian music was truly beautiful, the ikhlas concert. i shall never forget performing there and i thank god once again for letting me experience all this in my life and for all his blessings. Alhamdulillah.

Oh well, i am off to MATAKING, Sabah to dive again for a couple of days.... to clear my mind a bit from all the clutter and to experience god's greatness underwater. Will be safe.


Power to the people.

PS untuk semua yang ingin tahu, inilah my next project which i would like to involve the online community with... 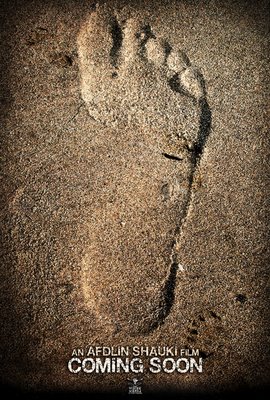 Yes it is true, i am doing my fair share of travelling these days as the completion of Sumolah draws nearer. I am currently in the SKY LOUNGE of the Bandar Seri Bagawan Airport waiting for my flight to Kota Kinabalu to pick up my kids who i miss so sorely. I miss them so much that it feels like i have been missing an internal organ which helps me breathe easier and a part of my heart which makes me whole.

I have been here for a show for Brunei Shell Marketing department but i received news that CICAKMAN is da bomb back home. This is so awesome. I saw the movie last week and told Yusry that he had done something really imressive for the Local Film industry and believed that it will do well. I am not saying that the movie was perfect ( my movies aren't perfect either) i did have some issues with the quality of acting in the film (AC, my friend, but in cicakman his characterisation was sadly annoying. Fasha Sandha i felt was horrendous in this one. Aznil irritated the hell out of me) but understandably Yusry is a technical director as opposed to an actor's director but looking at the bigger picture, this movie was outstanding for what it is, the first truly local CGI fest! and it really breathes the slogan NEW ERA FOR MALAY MOVIES and i personally believe it will be a hit with kids and malaysians in general.

Word on the grapevine is that CINTA is also a big hit in the country and this makes me really glad to know that the industry is alive and well and the support for it is forever growing.For your info Cinta is directed by Khabir Bahtia an excellent Indian Director who has now made malaysia his home. We worked as co-directors on my talkshow BILA LARUT MALAM before and am so glad that he has finally made a cinema feature. This has made so excited to come back and play.

If you ask me, the only way to experience a movie is through the big screen unless you have a kick ass hometheatre system that is. Still there is no substitute for going to the movies and sharing a couple of hours with a few hundred people, going an a similar journey with them, feeling the same feelings as them. I don't know if you realise this but for those few hours we as a people collectively through our minds have become one and is sharing one experience. freaky shit.

Thanks to all of you who have been supporting us in the film industry and your continued support i believe, is starting to pay dividends in the form of BETTER MALAYSIAN movies coming out. Although there will still be some crappy ones,good is starting to overpower evil. Let market forces rule their fate as it is the great equilizer and the key to weeding out serious karyawans from the, come to play-play and make fast buck types.

The new FINAS wajib tayang rule however is not helping independent producers, it is destructive and needs to be reviewed. Increase the number of theatres for malaysian movies since there is a surge of them, insteat of cutting the time one movie is shown before the next wajib tayang movie is shown. Currently one malay movie a week is the wajib tayang practice. How the hell are malay movies suppose to make their money back in such a short time. To help the industry, the government should by law encourage the exhibitors to do like the Thais and Koreans, increase the number of cinemas for local movies. For example, If an exhibitor has 11 theatres per cinema chain make 5 halls available for local movies and 6 for international releases. Can Malaysian Movies sustain the numbers to keep four theatres open, with your ongoing support and current market trends, the answer is HELL YES! Or the way the government can help is do like what the indonesian government used to do, BAN all international films from releasing in their country and maybe then we can finally see how much money local movies can really make. We don't want to go to that extreme, but those are steps which will move in favour of local filmmakers rather than always making us take whatever scraps that the exhibitors will give us. Something drastic needs to be done to sustain this malaysian movie boom and to further excite more Malaysians to watch more Malaysian products. That will encourage better quality products to come out because there will be more money in the industry. Who knows, the second coming of the Golden era of local films might be right upon us.

Trust me luke, for i am your father.