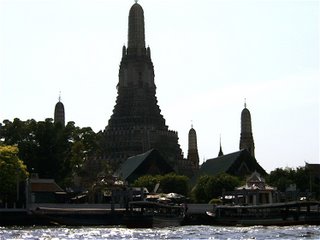 So as i was saying, before i was rudely disturbed by the reason why i actually ended up in bangkok in the first place - WORK, the hell-raiser kahwin dengan Evil Kneivel punya abang bawak boat tu drove like we were in an F1 powerboat race!! without the umbrella girls in the two piece bikinis la. 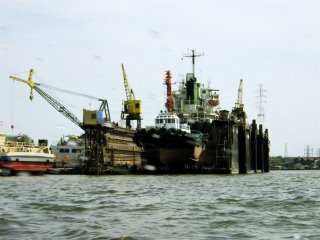 I was thinking to myself, i can see the headline of the Bangkok Post the next day already, 'Good looking Malaysian director found in unsanitary river doing unsanitary things!!" SCARY siut. But as the journey progressed and we headed to the children river (anak sungai literally translated), the smaller rivers which eventually flow into the Chao Phraya river, the feeling of death by getting run over by an oceanliner started to dissipate and what grew was a warm feeling of "oh god i am being kidnapped by this boat driver and i will end up being sold as food to Illegal TOMOI fighters. Or worse, i might end up being given a gun with one bullet in it and then asked to play russian roulette with someone who looks curiously like sylvester stallone in RAMBO 2. Arrrgh!!!!

Ok all jokes aside, a kekecutan telur did happen when the boat was cruising down this narrow river flanked by these swampy type trees when out of a sudden from underneath the the trees three boats started to appear and the sort of formed a barricade in front of my boat and one boat actually pulled alongside my boat and started to offer me beer, and when i refused he asked me to buy the beer for my boatman. I turned around to look at my boatman and he was grinning from ear to ear. I told myself, if i intoxicate him now maybe he'll forget to kill me. But as soon as i agreed to get the boat driver the drink, it suddenly dawn on me the error of my ways, "What if this is his tenth beer after going on the river for the tenth time today?" What if he rams the boat into the snake house (which is a popular attraction on the river), What if he runs over one of the kids swimming in the sungai... my paranoia new no bounds!!!

But in the end it was all ok... when i realised there were other boats with tourist in them coming alongside, i suddenly felt a rush of relief at the fact that these other people are also scared shitless with their respective boat drivers. It is true what one of you commented that memang gua kene kekah baik punya by the guide yang gua jumpa kat airport. Walau pun muka macam thai, tapi pasal pegang kamera... touristla tu.

Lagi satu kalau travel kat Bangkok tu, lebih selamat kalau ada kawan yang bawak you jenjalan. Selamat poket bukan apa, to tell you the truth eventhough there was the political demonstrations while i was there, other parts of the city were quite unaffected. As a whole, the thais are a very nice people and i guess even in Malaysia there are some of us who are forever willing to rip off the odd tourist, I mean it happens in most countries... My first trip to the UK many moons ago osso i got ripped off.

P.S. Oh and the real reason why i am in Bangkok is to meet Inthira AGAIN! Pictures coming in my next entry. 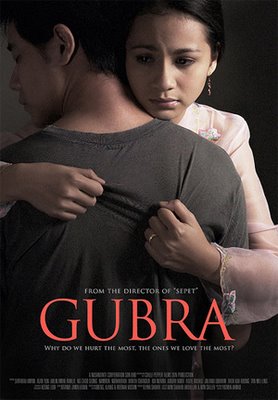 i m absolutely cant wait to watch GUBRA!!! hope i can join the flash MOB..never had a chance to join though..anything..just email me at lokmans@gmail.com

From what you wrote it does show that you're a very imaginative + creative + paranoid person... hehehe anyway it is good to have u back here brudder.

count me in.. and some other regular kodoks... please let me know this time who'll organise the thang !

Flash Mob!Nak join nak join!Never been to any flash mobs before.So this could be a great experience for me.There's always a 1st time to everything kan,Bro? :D Anyway,do lemme know when n where Gubra will be held at. Do email me at: lastmortal@hotmail.com. Thanks!

orang luar gelanggang: your attitude of denial (on local films) might affected our film industry and not to mention our country. kalau kita tak sokong filem kita, siapa lagi?

"..a kekecutan telur did happen.."

i like the part with on the kekecutan telur part..i laughed so hard that i think i even peed a little!