Assalamualaikum dan harapnya semua sihat-sihat belaka. Hari ini adalah, hari pembukaan festival filem Fukuoka dan saya berasa amat nervous sekali untuk mempertontonkan filem saya ini kepada masyarakat Jepun, walaupun Sumolah is out of competition. It's been a year since the last time i was in fukuoka and it is nice to be back. Festival filem Fukuoka tahun ini bertemakan 'wanita dan tarian' dan Filem Malaysia yang berada in competition adalah filem Dancing Bells dari Deepak Kumaran Menon. I hope he does well. It will be great for Malaysia.
Fukuoka currently is quite hot and dry but walking down the streets of tenjin in downtown Fukuoka brings back so much fond memories of shooting Sumolah here. The Fukuoka film commission which helped us a lot during the shooting of Sumolah, has invited Sumolah to be presented to the residents of the city of Fukuoka.
Yesterday i met with Mr. Ariga from Touch Planning (himself a film director having recently shot a movie based on a Manga) and he has agreed to be our sales agent in Japan. This is great news for us and Malaysia as it is not easy to get a sales agent to believe in a relatively unknown Malaysian film. Since there is many other forms of deployment of a film besides the cinema here in japan, he believes he can make some headway with our film to also be released on the dvd market which is huge (because there is no piracy in japan) , the internet, broadband tv, video on demand etc. This is exciting news, plus i have also brought some Malaysian movies for him to consider from Mamat Khalid, Ahmad Izham, Bade. I hope to bring more movies in time to come. 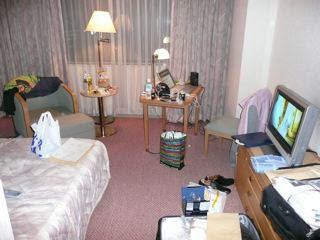 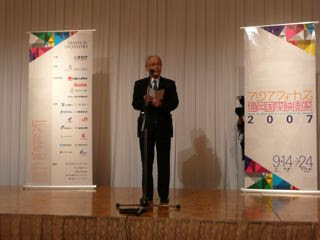 The Mayor of Fukuoka giving his welcoming speech. 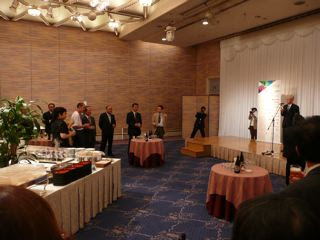 The ballroom of the Solaria Nishitetsu Hotel 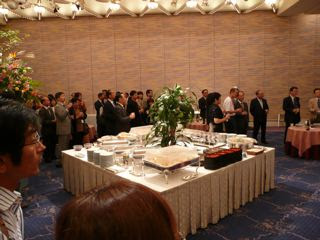 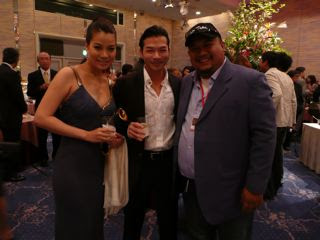 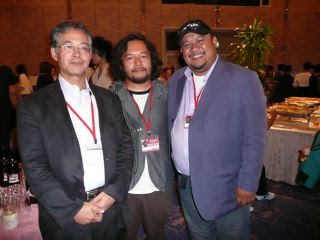 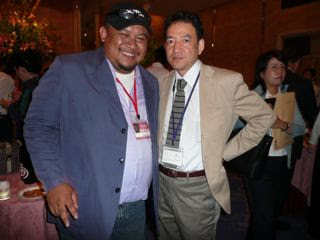 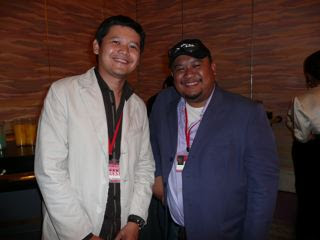 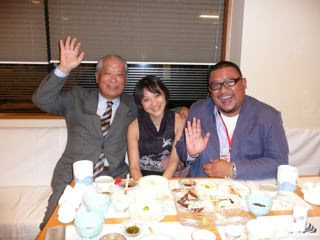 Kyoko my ad-hoc interpreter and Takayama san, what a friendly and funny politician. 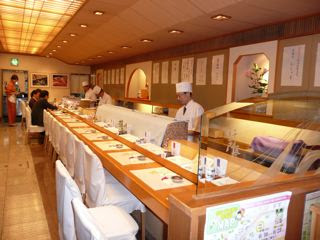 The restaurant that i had supper with my new japanese friends.
The many people i've met from the organising committee who have seen the movie, really loves the movie. They actually thought it was very funny. Tonight i had supper with the guy who is running for Mayor of Fukuoka, Mr Takayama Hiromitsu, who seem to have taken a liking to me mainly because I am Malaysian. Most of our conversation revolves around how he is such an admirer of Tun Mahathir and how he loves Malaysia because the people have warm hearts.... hmm.. masih lagi ke?... Are we still like that? Or are we too becoming too money hungry that we have stop being the legendary gentleman of Asia. I will keep you guys updated as the days go by.

Mope power to the people

Thank you Michi and Tomoko fo helping organise the schedule and also your wonderful contribution to Sumolah. Whatever success it receives is also because of your efforts.

When I become the first woman Malaysian PM, I will make you Menteri Kebudayaan dan Sukan (err...the sukan one, bahagian Sumo lah). That,and I will make sure Samy Veloo get rid of that ridiculous hair, if not the darn tolls. Unfortunately, I have yet to learn the art of kissing asses and I took the Hipocrates oath instead of the Hipocrite Oath. Ergo,my chances of becoming just that is pretty slim. Perhaps in the next life kot.

Thank you, on behalf of us, the proud Malaysians for trying your best to promote local films overseas. You da man lah...

Japanese, aaaahhh yes. My dad was there some 20 years back and I remember him telling us a story about his chaparone apologising in all honesty for the train that was delayed, bowing repeatedly saying,"Ibrahim saaan, many apologies. The train is going to be late." My dad asked, "how late?", wondering what he was going to do while waiting for the delayed train.
The chaperone answered,"Hait!The train is going to be THREE MINUTES late" and he bowed to reiterate his apologetic gesture.

Cheers then!! Keep up with the balance in your life. Power to Selambakodok !!!

yay!! Sumolah goes back to Japan! Have a great time back there Afdlin! and do try to tell us how they liked it, ya?
Lee thinks it should be sold to Australia too.

Sumo is brilliant, but my favourite is buli. Dont stop making movies, you are the hope of Malaysian and I am your fan.

"Most of our conversation revolves around how he is such an admirer of Tun Mahathir and how he loves Malaysia because the people have warm hearts.... hmm.. masih lagi ke?... Are we still like that? Or are we too becoming too money hungry that we have stop being the legendary gentleman of Asia."


I am currently a Malaysian student studying in Canada. Many people in here loves Malaysia and Malaysian people, mainly because we DO have warm hearts. Even in other countries that I've been too (mostly in the middle east), they loves Malaysian. We treated tourist very well, and therefore when we are in their country, we are treated nicely as well. My point is, I believe that there are still many Malaysian people out there right now who still have that gold-heart. Do not let the minority (those who are money-hungry) "memalsukan" your perspective towards Malaysian.

Selamat berpuase, and Proud to be MALAYSIAN! =)

haha,great job,,i hope you can bring more and more film to japan. ca i know which film do you give to them??? nice to see your pic. i'm from friendster user. come see you group fan in friendster.
http://www.friendster.com/group/tabmain.php?statpos=mygroup&gid=115147

These articles are fantastic; the information you show us is interesting for everybody and is really good written. It’s just great!! Do you want to know something more? Read it...:Great investment opportunity in Costa Rica: costa rica real estate jaco, jaco beach condo, jaco beach condos. Visit us for more info at: http://www.jaco-bay.com/

your article so amazing. hebat bro