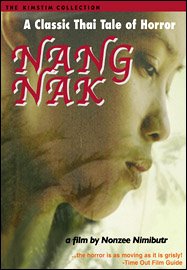 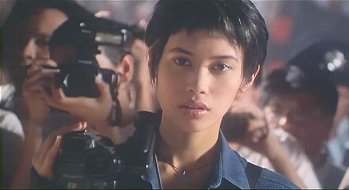 to try and join the cast of SUMO-lah. I will not be berlagak and try to hide my excitement to meet this lady tomorrow, i believe she is truy one of Asia's most remarkable female actors. She is currently shooting a new film produced by Francis Ford Coppola and directed by Prince Chatri Chalerm Yukol (Director of Legend of Suriyothai) at a budget of 50 million Dollarss!!! ( i suddenly have visions of Dr. Evil saying those figures aloud) and here i am a Malaysian Af-DE-WHo? offering her a role in a film with a budget that is probably smaller than the size of that production's catering budget. But i plod on, hoping that a good story would intice a fellow artiste to join a very determined and excited team of Malaysian film workers to try and bring a first truly International Malaysian film project to the region and perhaps the world.

A pipe dream, many might say but guess what? I am a person who constantly believe in dreams and making them come true. Buli was a dream... winning an award at the Malaysian Film Festival was a dream.... The current success of BAIK PUNYA CILOK is a dream... and now to conquer a greater vision of getting a local film distributed internationally... and maybe going to International film festivals and bringing pride to the country like P.Ramlee, Yasmin Ahmad, Ho Yuhang, Amir Muhammad, James Lee and to prove that mainstream doesn't mean shit-stream. Well, at least not all the time.

A great indication is that she has read the treatment and she thinks that it is really funny and a lot of fun. Next we have to talk money and schedules. YIKES!!!... donnolah... apa nak jadi-jadilah... Just tebalkan my face and make my ten cent face, get on my knees and get ready to beg and grovel. I have no shame, some of you might be saying.

Ab-so-frakking-lutely!!!... whatever for a DREAM.

Let's make Cilok the biggest film this year (well it is the last local film of 2005 anyway).... SPREAD THE WORD MY FRIENDS... UNLEASH YOUR EXCITEMENT TO THE REST OF THE COUNTRY... IT IS YOUR FILM... YOU MADE IT THE MONSTER THAT IT IS RIGHT NOW, WITH YOUR SUPPORT!!! NO MATTER HOW GOOD THE MOVIES ARE IT WOULDN'T MEAN JACK WITHOUT YOUR SUPPORT!!... YOU DESERVE BETTER MOVIES!!!... DON'T ENTERTAIN MEDIOCRITY!!!... SUPPORT NEW MALAYSIAN DIRECTORS!!!.... THE POWER IS WITH YOU!!!.... YOU TOO CAN STOP PIRACY IF YOU WANTED TOO!!!.... POWER TO THE PEOPLE!!! 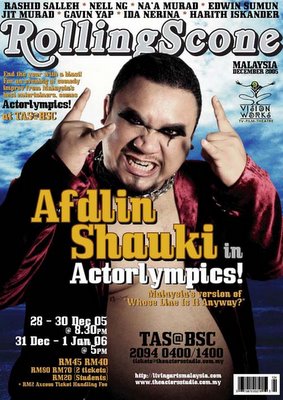 PS. ACTORLYMPICS starts tomorrow!!!.... so for an evening of live selambakodok komedy and the opportunity to meet the stars of BAIK PUNYA CILOK, CIP KODOK and Harith Iskander LIVE don't forget to make a date with us at Bangsar Actor's studio.
Mind Purged by Cipkodok at 12/26/2005 02:38:00 PM

guuuud luck for the meeting!

i'll be watching ACTORLYMPICS on the 30th. The last show was damn hillarious. i'm expecting a bigger one this time around.
See you kodoks there!

Good luck in 'securing' the actress! ;)

And looking forward to the 30th for Actorlympics too! See ya!

yo bro! good luck in getting Ms Intira Jaroenpura .. she's absolutely gorgeous. She will say yes to you .. hehe.

good luck bro...
we are always by ur side...
lets the kodoks brood rule the WORLD!!
Afdlin WORLD!!!

Wah!!! This guy is really ligatlah. When the film is running (Baik Punya Cilok), he's already all over the world working on his next movie - Sumo-lah.

Ligat, ligat ... gua respectlah tu Bro. Not only as a creative kinda guy, not only as a movie maker, but also as an entrepeneur. Maybe you should get an award for that too ...

mlm ni...anything bro afdlin...all da best to BPC....we'll do anything to make sure all our fren watch this movie...layan bpc mlm nih...

bro, i wrote a review on BPC at my blog

I've seen Intira Jaroenpura in a couple of Thai movies like "Six" and "The Unborn" and I think she's a brilliant actress and I personally like her, those short hair and all.

Good luck in wooing her tho. Can't believe she's actually a major star, thot she's one of those good actress but never given great roles, except from being scream queens in horror flicks.

I saw Baik Punya Cilok and I like it, I ve been spreading the kodok news all over...Keep up the good work ...All the best

Well done on BPC! You totally show us how Malaysian "almost dark" comedy can be done!

Keep up the good work - and do call me for auditions for any film that requires a twin. (people say I look like you).

btw, I mauled you over at one of the ex-intekma lions friendly games several years back..

Sorry the booking allocated seats for this session is fully taken up. Please try another session. There may be tickets available for purchase at our cinemas."

haha.. I truly believe that ur face is worth more than 10 cents!

was at bukit raja for road show. completely packed! had surprise visit at cinema as well after the show ended and the audience were all so happy! got small quiz, then gave away goodie bags.

this weekend got some more surprise visits kat KL/Selangor cinemas. which cinema? surprise... ;-)

Watched BPC last night with hubby & two boys. All of us trully enjoyed it. It was simple but yet so refreshing. Congratulations to you & the BCP team.

I have spread the news this morning to various yahoogroups that I joined as well as friends at the office.

It's so much better than Buli as well. Keep improving & we will support you whichever way we could.

Ain't it the time to bring the actorlympics to a broader audience rather than targeting the "artsy-fartsy" and "high-society" community as tehy label themselves as? How are you going to teach the common malaysian people to accept stand-up comedy if they are not exposed to it? Now it's time to kill the slapstic comedy such as senario? Please come and clean us from them. I beg you.

Every once a while a bright spark comes along and am very excited about your success and the many successes you will be getting. Malaysia really BOLEH! Please don't forget the little people. Will see you and gang at BSC.

I'm happy to report that it's still full house with satisfied looks on everyone's faces as they left the hall after the show! ;)

Geng! Aku memang tak suka beli CD pirate kalu local movie, tapi filem holywood I would rather buy the pirate one lah ... Maybe people will say I'm bad or whatever. The reason behind this is just plain simple, I do not want to give them more money - they'll filthyn rich what ???

The "artsy-fartsy" group as you call them are people off the streets who bothered to buy the tickets for the show! We don't select our audience, they select us!

So please, if you want to see the show, don't let your ideas about who's who get in your way!

if you mean you would like to see the show outside of KL then that is another matter entirely. We have always wanted to do that, but time and scheduling has always been a factor.

Respectfully - and Happy New Year to all,

Cip kodok
Great movie !! Had a blast watching it. Lawak habiss..... So far everyone I know who has seen it says it's great.

A commendable review on NST today.

"THIS has to be the funniest comedy of the year. Bursting with raunchy humour and witty lines, Baik Punya Cilok scores with a winning mix of ingredients to make audiences fall out of their seats laughing.

From the opening scene itself you know you’re in the hands of a gifted and focused director."

Francois de La Rochefoucauld once said, "Nothing is impossible; there are ways that lead to everything, and if we had sufficient will, we should always have sufficient means. It is often merely for an excuse that we say things are impossible"

and cip, you are a living proof of tht quote.. bravo!

Bro Afdlin!...Congrats for Baik Punye Cilok! It was definitely the best local movie ths year. You have improved a lot since Buli. Baik Punye Cilok mmg complete, flawless & memuaskan hati I bila keluar panggung. This is how you make a movie...simple plot with a twist, tense, sedih, giler2, violent sikit & most of all...Funny! Sume ade!...

yo* im agree with those who really want to upgrade the new film director in Malaysia...
have my best support coz i watch all the quality movies in malaysia..pleassssee im begging do not produce love stories which is so "meniru filem2 laen yg pernah exist" please created something which is not sooo geli...i like all your movies..ade sumer..yg penting movie2 tersebut mmg best..afdlin best* keep on rollingggscone! yeahhhh =D ahahah kem salam mia sara oke

Will you have any more comedy act in April? Balik Kampong in April, so hoping that you'll have another act for me and hubby to go to!

Trying to find VIP Concert Tickets for yourself?
Surf on over to VIPConcertTickets.com ( www.vipconcerttickets.com ). A great source of material to help you get the best seats for just about any event. It's not that hard to learn the tricks of getting VIP Concert Tickets to see your favorite show or musicians. NY Yankees Tickets